Find me on:
LinkedIn

The first CO2-based immersion cleaning system was constructed and tested by Mr. Orval Buck at Hughes Aircraft Company in 1984, essentially adapted from a German supercritical CO2 (scCO2) extraction process for decaffeinating green coffee beans [10]. Shown in Figure 1-4, the first scCO2 cleaning system comprised an insulated high pressure vessel (retrofitted isostatic press) which was temperature-regulated using flexible silicone-insulated heating tape and a thermostatic controller. A contaminated production part was loaded into the vessel through a topside threaded closure. Following purging with CO2 gas to remove internal atmosphere (i.e., residual air and moisture), the vessel was fluidized using a high pressure pneumatic pump supplied by a cylinder of high pressure liquid CO2. The vessel was compressed to various supercritical fluid conditions ranging between 2,000 and 5,000 psi with the pressure vessel heated to a temperature of between 40 and 60 degrees C. 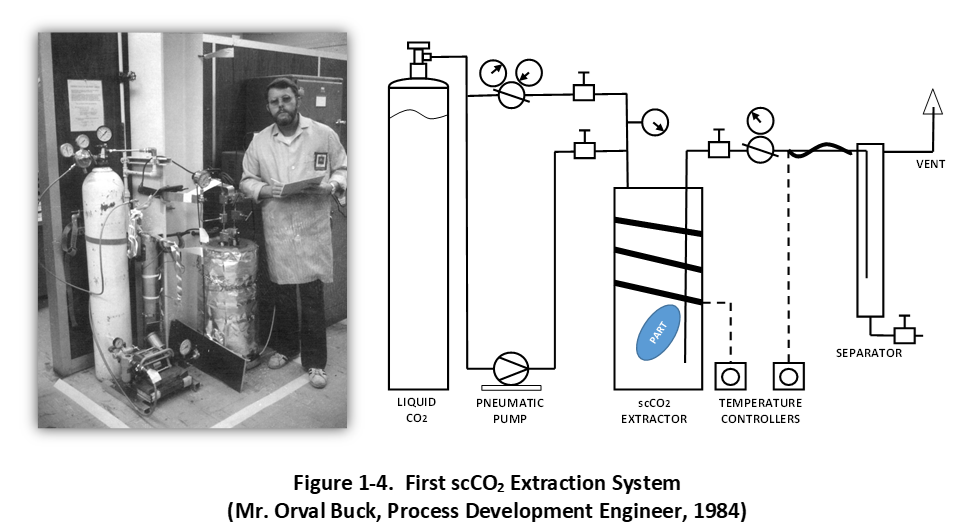 Upon reaching operating pressure (at a given vessel temperature), contaminated parts were cleaned (or extracted) for a pre-determined period of time between 0.5 and 4 hours, during which scCO2 penetrated and dissolved contamination contained on a substrate surface, for example an oily machined optical bench, or within a substrate matrix, for example a silicone jacketed power cable. Example contaminants included silicone oils, unreacted monomers, activators, plasticizers, and machining oils. Following extraction, the pressure vessel was returned to atmospheric pressure. This was accomplished by exhausting internal scCO2 (and dissolved contaminants) through a pressure-reducing regulator and tape-heated exhaust pipe into and through a gas-extract separator, and finally venting the CO2 gas into the atmosphere through an exhaust vent. Initial extraction studies determined that theCO2 extraction process could achieve non-volatile residue (NVR) and Space outgassing performance criteria for total mass loss (TML) and volatile condensable materials (VCM). The successful outcome of this initial evaluation resulted in continued internal interest and funding of the development of a second more versatile and semi-automated (and closed-loop) model. The new testing platform would be used to evaluate a range of dense phase gas candidates as well as innovate processes such as advanced oxidation and coating. 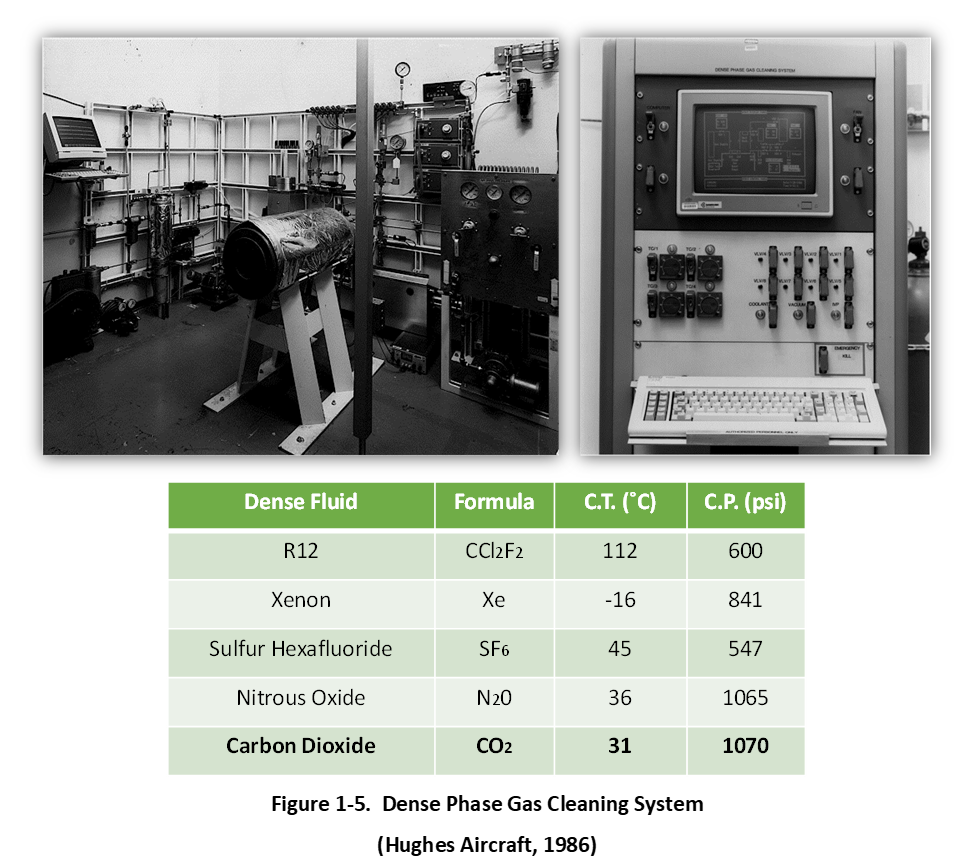 During this development effort, a continuous cleaning-extraction process was developed that employed in-situ phase change to alter dense phase gas solubility behavior during a continuous flow cleaning-extraction cycle. The new process was called “Phase Shifting” and enabled more efficient removal of a wider range of (low and high molecular weight) contaminants from complex components used in the fabrication of Laser, electronic, and optical assemblies [11]. Most importantly, the new phase shifting process resolved blistering problems common to many polymeric substrates during depressurization. During processing of polymers, liquid CO2 is used first to extract interstitial contaminants, following which the dense fluid and substrate is heated to supercritical temperature for a pre-determined period of time. As a final step, the chamber is slowly depressurized to ambient pressure while maintaining the internal temperature above the critical temperature to prevent the formation of a liquid phase. The absence of surface tension during the supercritical fluid-to-gas phase transition and super-cooling effects due liquid CO2 boiling and expansion allows the extracted polymer to de-swell, remain elastic, and the dense fluid (and contaminants) and gas to more easily diffuse from microscopic substrate pores during depressurization.

The Phase Shifting process is used today to precision dry (remove water contamination from) microelectromechanical machines (MEMS). This supercritical fluid drying process is called Critical Point Drying (CPD) and prevents the mechanical collapse of moveable microscopic features due to surface tension exerted on these structures by the drying fluid during conventional evaporative drying techniques. In a typical CPD process, water-wet MEMS are first carefully soaked in acetone (a low surface tension fluid) to dissolve gross water. Acetone-wetted MEMS are then placed in a pressure vessel and contacted with liquid CO2 (an ultra-low surface tension fluid) to dissolve the acetone, following which the dense fluid is heated to above the critical temperature (and pressure by default) to supercritical state (a zero surface tension state) and depressurized through the gas phase to ambient pressure.

In 1988, I was Group Head, Cleaning and Contamination Control, at Hughes Technology Support Division. I was assigned the role of principal investigator of CFC usage and potential alternatives in cleaning operations throughout Hughes manufacturing operations. A CFC-based cleaning solvent ban was scheduled to begin in 1989 under the Montreal Protocol. This was a very fortunate opportunity as it exposed me to a variety of precision cleaning applications (problems-solutions) company wide and in addition to the CO2 cleaning research underway at the time, allowed me to investigate and develop new UV-ozone and aqueous cleaning alternatives [12-13].

Dense phase CO2 possesses cohesion (solubility) chemistry similar to a range of organic solvents including Freon® 113, n-hexane, 1-decene, and volatile methyl siloxanes, among many others. As such, dense phase CO2 can be used as a base solvent to perform manufacturing processes typically employing conventional solvents, and with unique processing capabilities. For example, an application developed for the new phase shifting process involved the coating or impregnation of microporous bronze bushings used in the M1 Abrams Tank with a lubricant to produce a self-lubricating bushing [15]. The dense phase gas coating process involved injecting and dissolving a proprietary fluorinated lubricant into liquid CO2 containing a basket full of bushings to form a saturated bath. The lubricant-saturated liquid CO2 contacted the bushings for a 30 minute contact period to insure penetration into the microscopic pores. Following this, the liquid phase CO2 was transitioned to supercritical state by increasing the internal temperature to above the critical temperature. Due to the selectivity of supercritical CO2, the solubility of fluorocarbon lubricant could be adjusted simply by raising or lowering temperature above the critical point. This resulted in a selective deposition of a uniformly thin film of lubricant onto both the internal and external surfaces of the bushings. Following this the supercritical fluid was removed from the processing vessel.

In another patented development, dense phase CO2 was used as a processing solvent within which a substrate was exposed to pulsed ultraviolet (UV) light and UV-reactive additives [16]. Similar to water with regards to its light absorption characteristics, dense phase CO2 is an ideal media for performing UV-assisted cleaning, coating, or surface regeneration processes. UV-assisted dense phase gas processes involve the addition of oxygen and hydrogen peroxide to accelerate treatment (i.e., cleaning, surface modification, disinfection, sterilization) of substrates immersed in dense phase CO2.

Also in 1988, Hughes (recently acquired by General Motors) requested proposals company-wide for converting internal proprietary technologies developed for defense-related programs into non-defense commercial products and ventures. Our group submitted a proposal to commercialize dense phase gas cleaning technology as an environmentally-friendly precision cleaning alternative to (soon-to-be) banned CFC cleaning solvents. Although considered, ultimately the proposal was not selected for funding. Shortly thereafter I resigned from Hughes to pursue the CO2 business opportunity on my own with a new idea for CO2 immersion cleaning.